We've recently released an array of improvements during our premiere of the Arma Reforger Experimental build. Here we'll discuss what new additions you may encounter in the Workshop and Workbench, some words of warning regarding mods, and our plans for addressing unfair advantages in the game. There is also information on how you can play with our team from time to time!

Last week, we released Arma Reforger Experimental, a separate Steam client application that maintains a build of experimental content and features for owners of Arma Reforger. This build was released with items such as a new destructible system, fixes for the broken camera controls while transitioning from Game Master to Armavision, changes to the road rendering process split to have smoother transitions, and much more. You can find the full changelog of our recent 0.9.6.38 and 0.9.6.49 Experimental updates on this page. There are many benefits of this build, including the ability to provide more frequent and flexible updates to our players. If you'd like an advanced look at these features in which to help test, then you can find the process to get involved in our recent news article.

Some of you probably noticed that one of the Experimental server caps was increased to 64 players. This is to gather more feedback about higher player count multiplayer stability. Quite a bit of our focus was spent to optimize network traffic in 0.9.6 and we are looking at stressing those solutions using public stress-test play sessions. We are going to bring our typical playtest crowd which is a mix of QA engineers, testers, and developers. We hope some of the players can join us and we can bring the numbers on a single server to their limits. We've already held one play session, thank you for a good match, and we are pleased to say that the stability was better. We are looking to announce more of these types of sessions in the future, so keep an eye out on our social media if you wish to join in.

The Arma Reforger Experimental build is updated on Steam!

We will run a public playtest at 14:00 CEST, which you can join.

You can still enjoy new servers created exclusively for the experimental build.

Included along with the 0.9.6 Experimental update are several areas that have been enhanced that we would like to touch on:

To start, there has been an improvement with our Mod Manager, in the in-game Workshop, which helps users to manage their mods with presets. Players can now easily enable/disable mods and create presets from the active ones. The feature also includes a tool for a more straightforward configuration for server admins running dedicated servers with mods. There's a tab showing both server mod configurations and a command line option needed to run the game if needed. 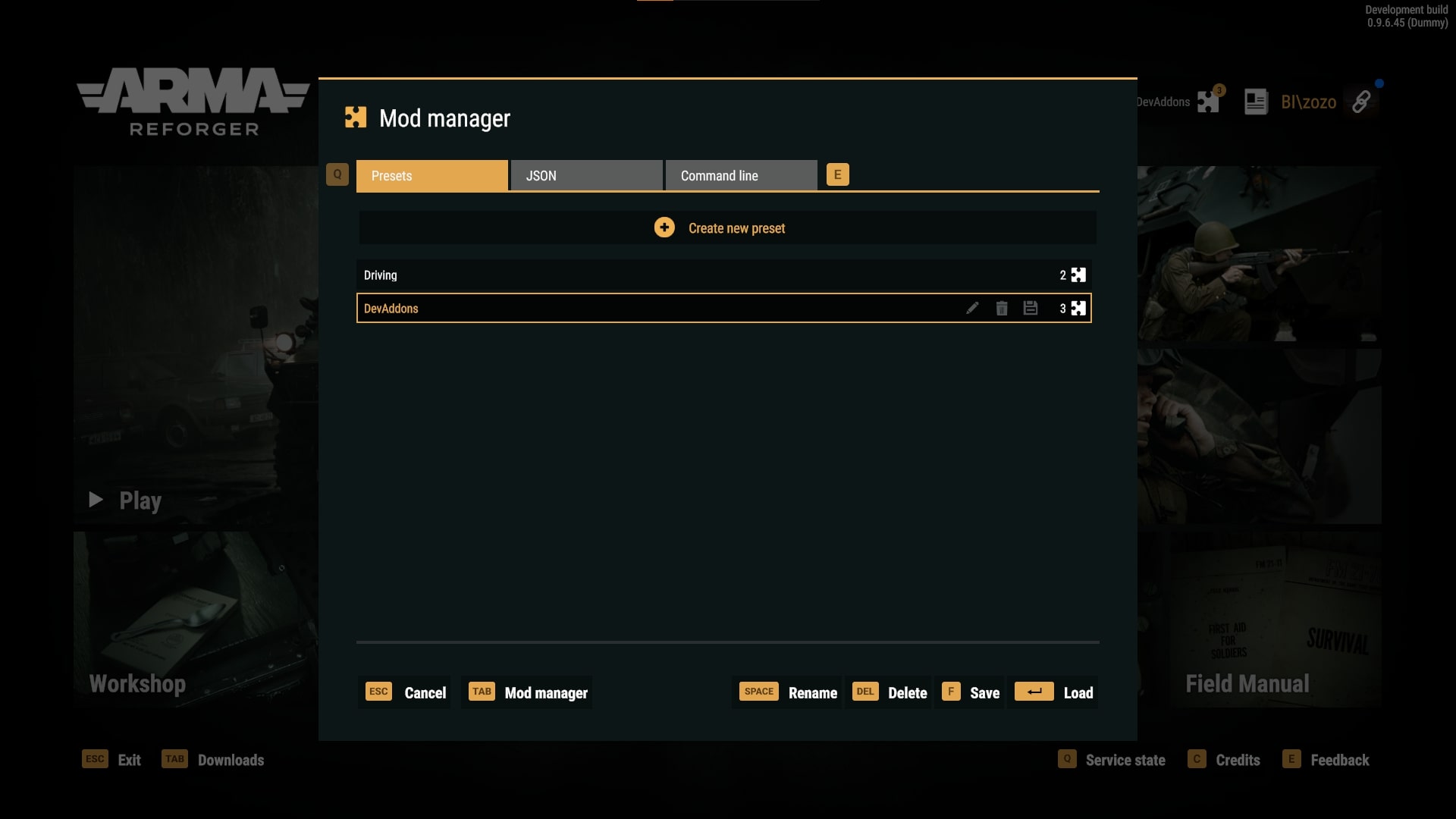 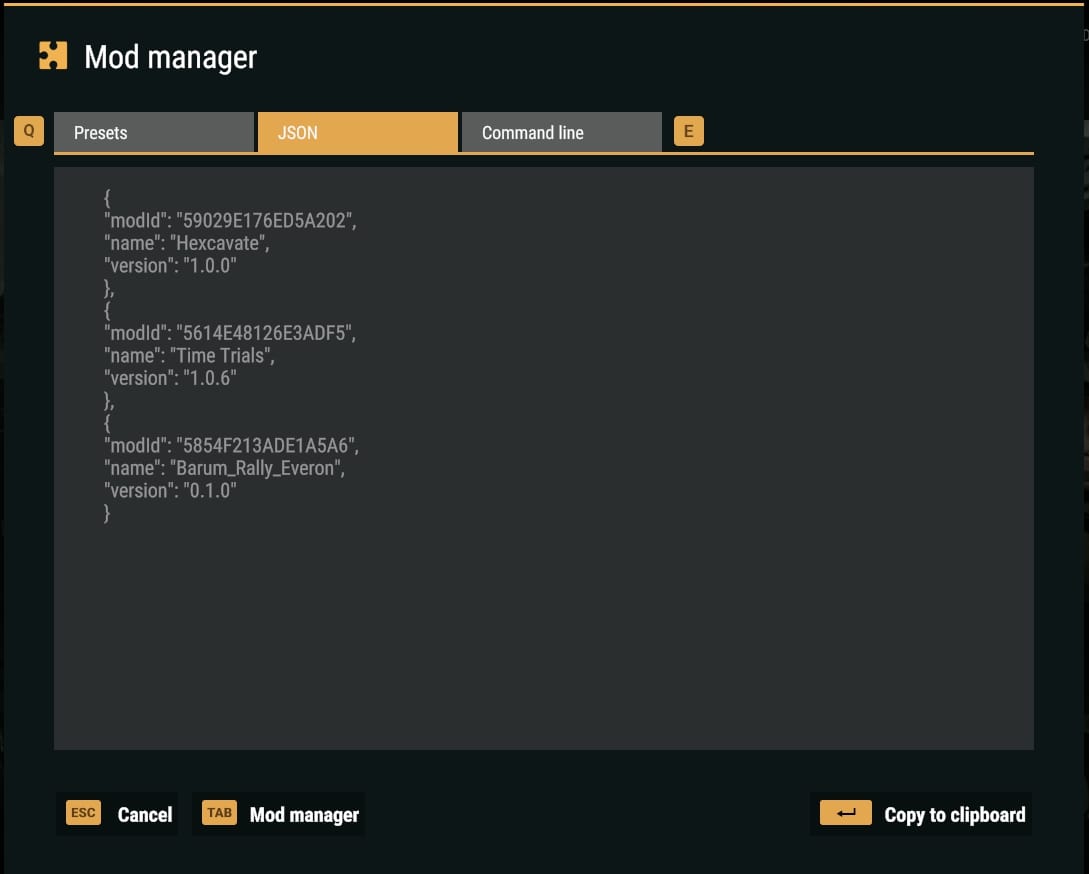 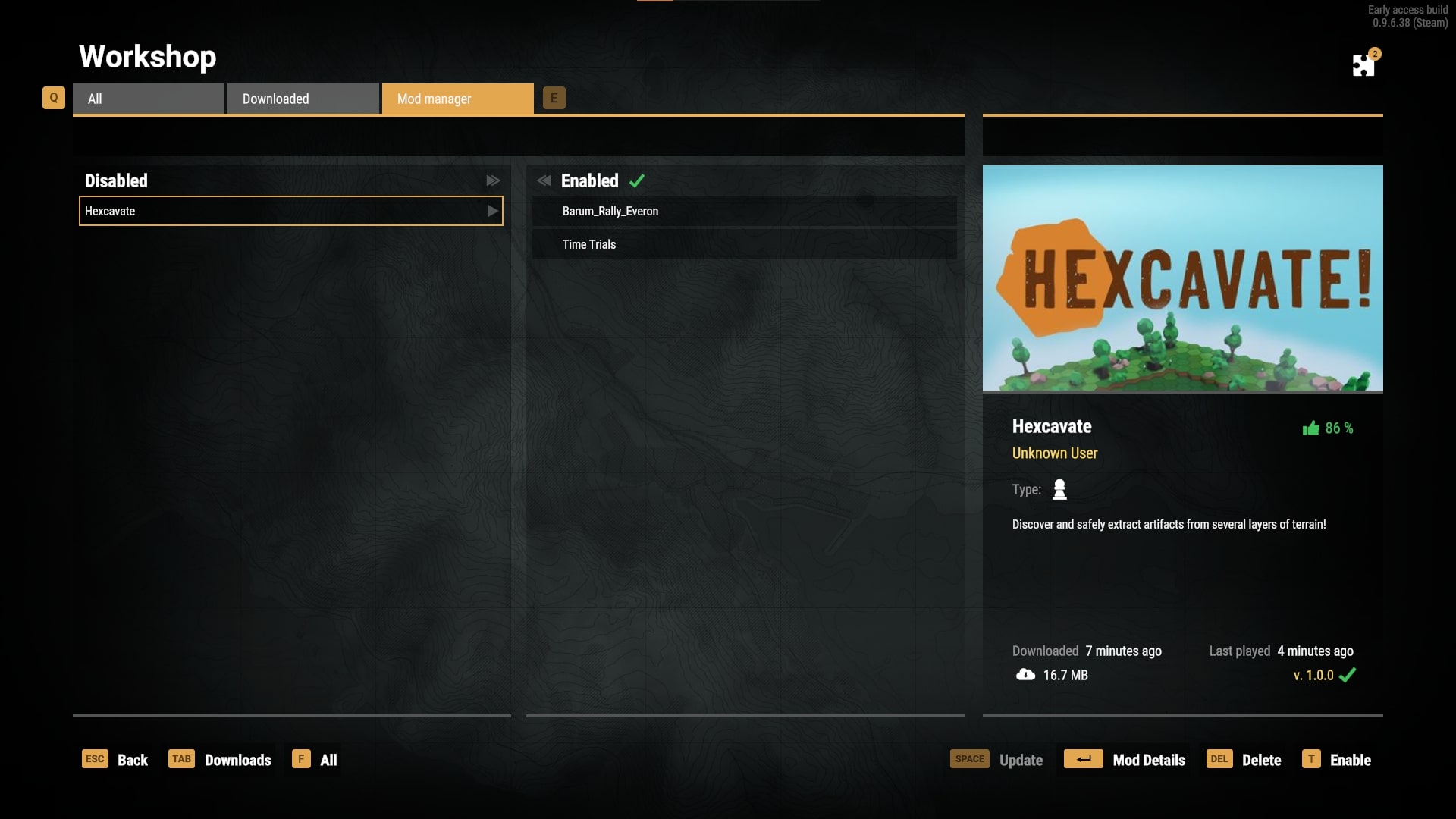 While we're on the topic of server configuration, anytime a user wants to start a dedicated server running his favorite scenario, the scenario ID must be set in the server's configuration file. This is only accessible to Steam players and modders. The snippet of this part looks like this:

So, where do you get the ID from? There's a startup parameter that orders the game to scan through the data folders, including the downloaded mods. The result is written down in the console.log:

Check the console.log file, usually placed in "\My Games\ArmaReforger\profile\console.log"

You should see something similar there: 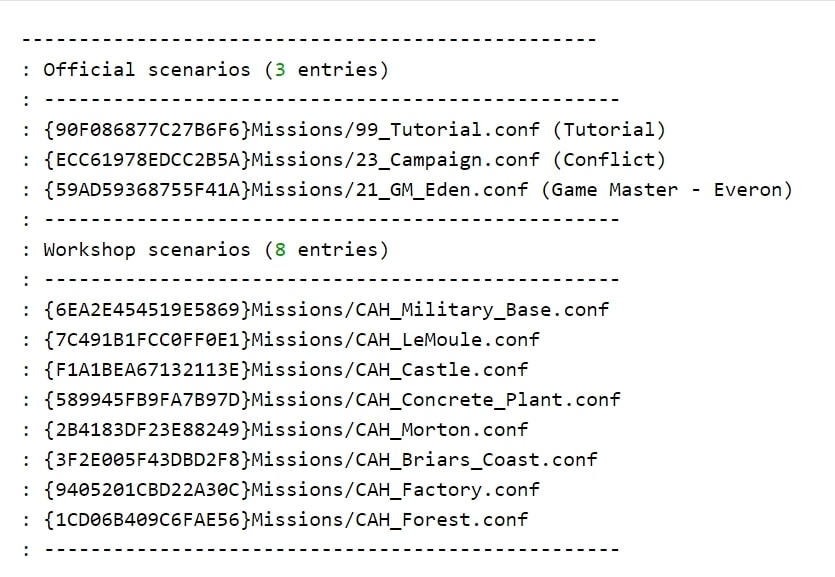 Lighting has also gotten some attention. What does it look like when you turn on the light portals? Look at the difference! This feature premiered in the experimental build. Be aware that this feature is heavily work in progress, and this is not a final state. 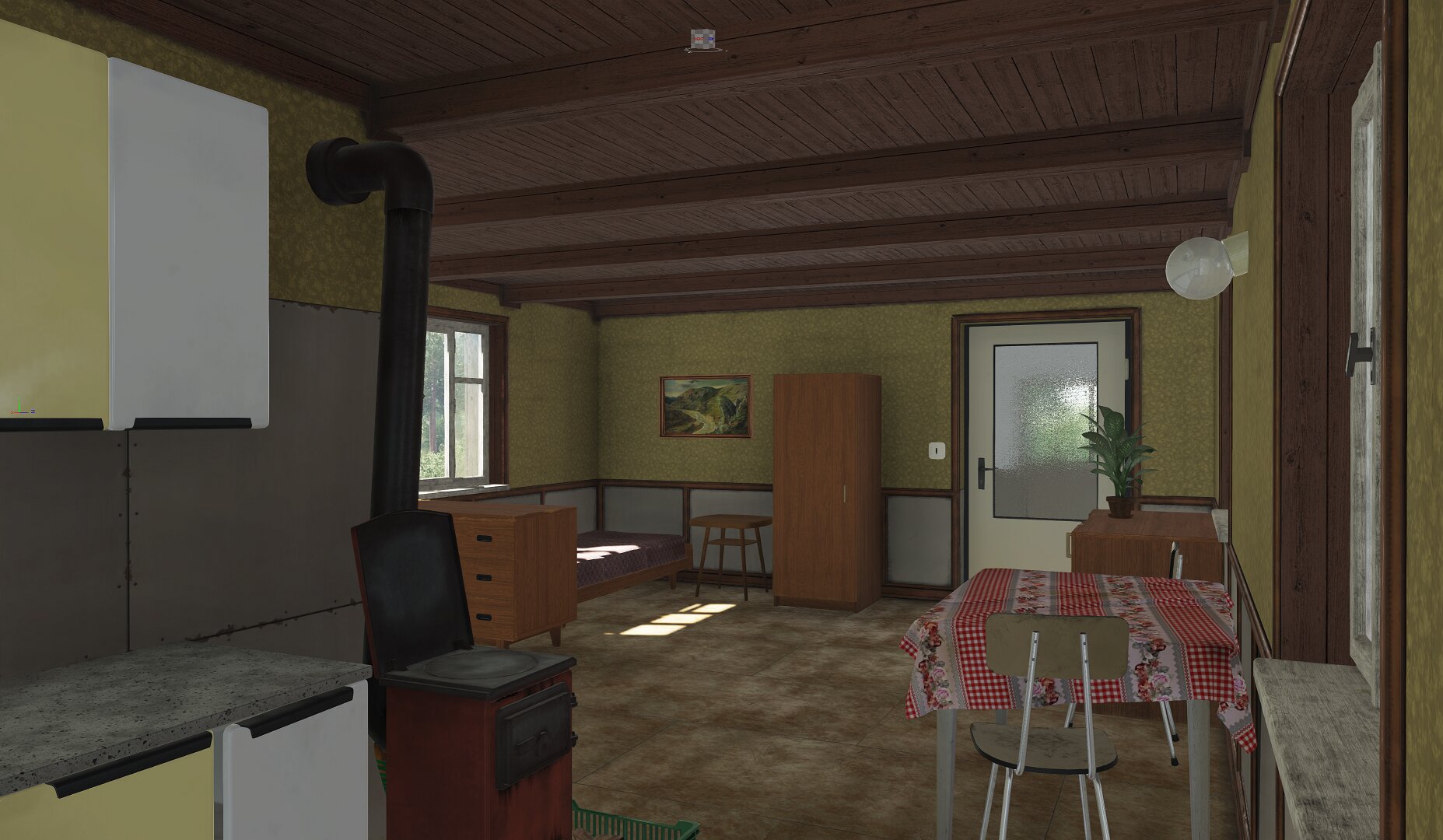 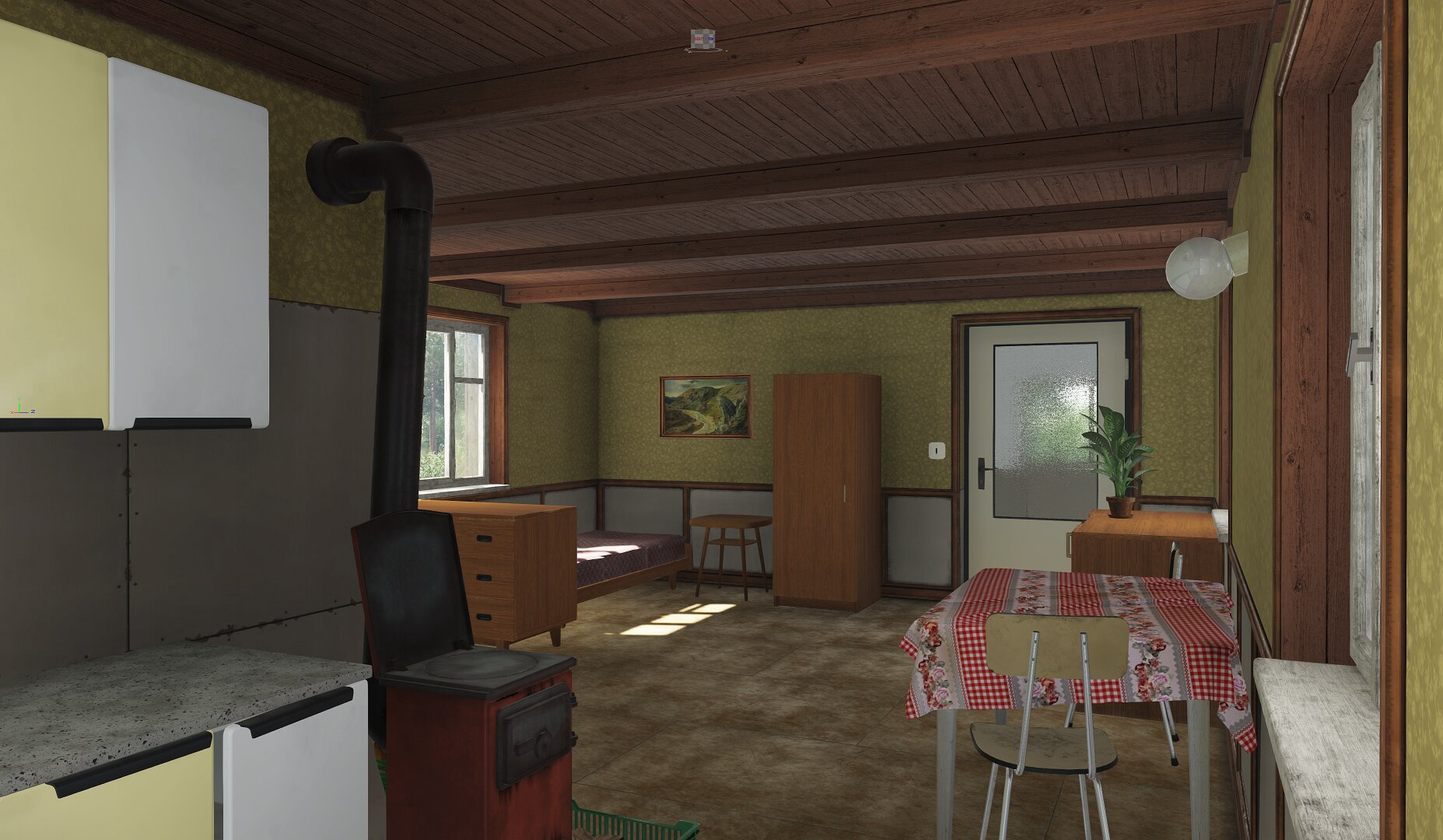 Lastly, we would like to inform you about a few changes regarding Steam and Workbench. Steam has been integrated into Workbench, so now Workbench will require running the Steam app in order to start.

Since Arma Reforger's release, there have been a couple of features of the game and its game modes that we would like to discuss, specifically on the nature of unfair advantages:

If you improperly use a flag, emblem, or uniform from the adversary, it can be considered a war crime. That's what the rules tell us.
In Reforger, it might get unfair if a member of the opposition steals an enemy uniform and uses it for creating a ruse (especially with a combination of a stolen radio). In Arma 3, we just disabled the feature (redressing the adversary uniforms), since there was not any further plan with it. But that's different now. The biggest problem in the game is mostly the fact that this action is very easy to do. Simply a matter of a few clicks. This should not be the case and here is how we plan to remedy this in the future:

On a similar note, players can take enemy radio and listen to adversary conversations. And not just this, they can, if they know the frequency, also speak to the other party.
The reason why we don't deny this is the fact it generates very interesting situations. However, we understand it can get very messy to understand who's actually the enemy. To mitigate the issue we have already added the caller identification of the station.
For the stolen radios the game shows "Unknown station." That's of course not enough and some people, who like this feature, argue it's now easy to discover who's the enemy. What do we plan to do:

What do you think? Let us know!

Now for a separate, but equally important matter, we want to assure our community that downloading mods from our official Arma Reforger in-game Workshop is safe. However, downloading and running mods from external sources (as for virtually any other software) always poses a potential security risk for the user. Should you want to download some software from an unknown publisher, always make sure the source is trustworthy - check the popularity of the plugin, do not run it until you know what it is doing, and report back when you have some suspicion.

Of course, we have built the Enfusion engine (and Workbench tools) with extensive modding possibilities in mind. In fact, our own developers in Bohemia Interactive are using the same tools as we offer to the community for free with the Arma Reforger game. These tools give modders previously unheard possibilities to create new assets and features and/or change almost every aspect of the Enfusion-powered games. With these possibilities, however, comes the risk of exploits. Once again, users should ALWAYS be cautious with running any software from an unknown source. We are very grateful to community members, such as Arkensor, for bringing forward and pointing out the harm that might come from issues like these. Having said that, we are working on further enhancement of our tools to minimize potential risks for our users by automatically checking code for known risks and by introducing a system of whitelisting trustworthy processes. We will be introducing these solutions in further updates.

You might have spotted that another Community Radar recently landed - COMRAD #4. The community as always has been very active and creative with their amazing artistry and talents. We look forward to seeing the progress going forward.

Some of you might have spotted our team out on the battlefield already. We love to play our game and always looking to get involved more with the community in a more organized way, either with you or against you. You can definitely find us recently on our Experimental servers testing out changes, collecting feedback, getting to know our community, and most importantly having some fun.

I had an epic time. I'm not long finished playing, I was playing with @VojtechMatous and a few other others.
We got the truck to safety and had some very intense fighting along the way. Love the 0.9.6 Experimental update, Can't wait for the future #ArmaReforger @ArmaPlatform😀👍 pic.twitter.com/qqreYSDkF7

Our team is also preparing for a wide variety of organized scenarios. If you're a community or group, we'd love to join your milsim session but would even be willing to hold a friendly match with a PvP clan on one of our C&H maps. In the meantime, come meet us on public servers and say hello!