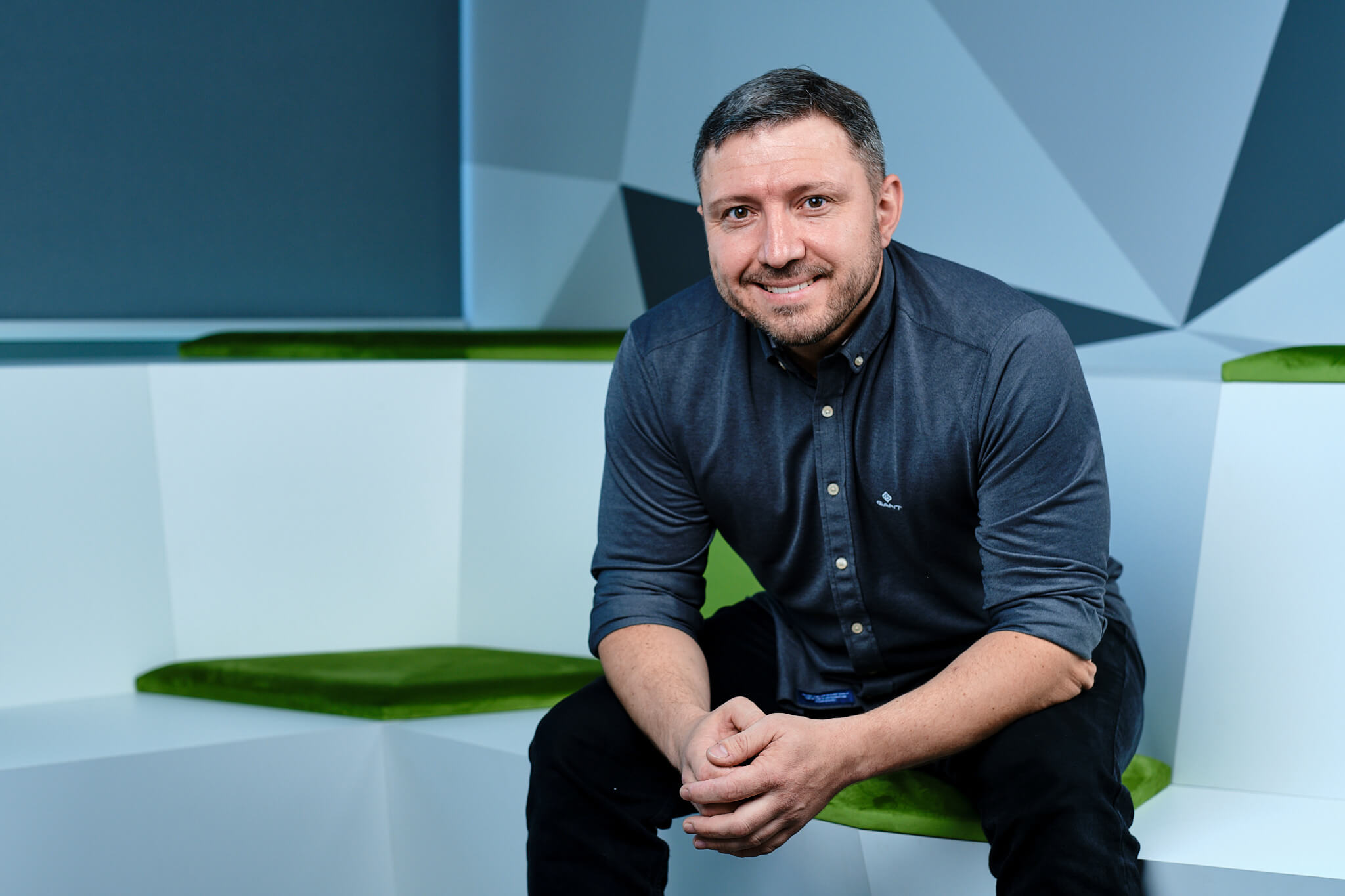 Hi Jan, can you please introduce yourself and tell us a bit about yourself?

Hello, my name is Jan Dušek, I am the project lead of Arma Reforger and have been with Bohemia Interactive for around 12 years already. During that time, I went through various roles, mainly sound design and music, video editing, and with my background in physics, I was participating on development of our audio engine.

Tell me, how do you feel about releasing the game you’ve seen grown for so long?

You mean grown from scratch, right? (laughs) It was a very long and challenging journey we’ve been through. It’s the most difficult discipline to start development of such a complex project from scratch when at the same time the game engine is in development too, and in addition to that, Arma came to consoles for the first time! We went through a lot of prototyping, R&D, struggles, and of course mistakes from which we have learned a lot. But it was not only a game which was in development. We started with a few people and in 3 years have grown into a team of almost 150 developers. Last, but not least, our workflows and pipelines went through massive evolution as well. You see, it was extremely challenging on all fronts. I am very proud of what we have achieved so far, so I feel totally excited about the release!

Arma Reforger is presented as a creative platform with vast array of options of playing or modifying it, can you tell us what does that mean specifically?

Arma Reforger is a package of features, assets, playable content, tools, and services. You can either play our official game modes with your friends, start exploring your creativity by playing first with Game Master, dive deep into Enfusion and start modifying/creating game assets, or creating more complex mods using Workbench – the tool we are using for development as well. And in the end, you can share your creations with others using our internal Workshop solution.

Why are you releasing the game in Early Access? What changes can be expected in the future?

No Arma game can be created without a community. Arma Reforger is a foundation to Arma 4 and we really want community to be with us as soon as possible to give us feedback from the very beginning. Yes, the game we are releasing to Early Access has limited scope and of course there are problems, but it’s already solid to play with. We are very honest here.

In 1.0 you can expect content expansion of both features and assets, but more important for us is to focus on optimization, stabilization, fixing, and improvements of the core features. The foundation has to be solid.

Arma Reforger is being released on Xbox, the first Arma game from the series. Since Arma was always on PC, how did you manage to transfer the experience to Xbox and how is it different for console players compared to PC players?

Well, it was very challenging, as with everything in Arma development. The key for bringing the same experience to console players is in simplification of controls but preserving the experience as much as possible at the same time. We’ve been through a lot of iterations and we are still not done yet. No matter how great design you have, everything is about playtests, where the ideas are proven right or wrong. So hopefully console players will give us feedback too! In some cases, the experience is even more fluent on consoles, especially when you can benefit from an analog controller.

What do you think is the most exciting feature of Arma Reforger?

I think the environment itself! Thanks to the brilliant Enfusion engine and, of course, whole amazing team of Environmental designers and artists! Already in Early Access we have achieved really impressive audio-visual authenticity and immersion. Here we will definitely be focusing on much broader interactivity with environment. We want people to enjoy the game as much as possible just by walking around. I am also personally very excited for simulation of vehicles, which is already much better than in our previous titles.

So you are leading the development of the game as a project lead, what does your role entail?

The role of the project lead can be really different in different projects, but more importantly it’s changing through the project development phases. In the beginning my main goal was to literally start a development from blank canvas with just a few developers. The goal was to deliver a prototype of new complex Arma project on new engine and deliver a first prototype in 40 weeks! After 4 tough months, the team did an amazing job and we were playing the first multiplayer deathmatch scenario for the first time, the milestone was called “The First Blood.” This is how it started.

Now, after 3 years we not only have a solid foundation for Arma 4 with huge potential. We have a big and strong enthusiastic team, so my role now is to maintain and reinforce the team, as well as to maintain a direction of game development, sharing the vision, unify, and play the role of a dentist, fixing whatever does not work. And much more, for instance I am still personally involved in the creation of our beautiful soundtrack.

Complexity of my agenda grew exponentially, but otherwise, absolutely no change in my thinking happened. I was always devoted to Bohemia Interactive and Arma specially, since my first day, so no matter what I am doing I want our games to be the best we can make them to be. I always considered myself to be a service for the team and project and this will never change.

I even benefit from my other skills, for instance I’ve composed music for all my life, so maybe the leadership has something in common with it. When you compose the music, it’s also a complex matter. You need to decide which players are leading the melodies and which players are in their “teams” so everything is well coordinated, otherwise nobody will ever listen to it.

Arma Reforger is an incredibly complex project, developing new game (platform) and a new engine simultaneously, how did you approach managing such large matter?

An incredibly complex project is incredibly challenging to manage, but at the end everything is about hierarchy and iterations. In the very beginning we started with multiple brainstorms about what direction we wanted to go, what Arma 4 should be about from all points of view and started processing it. After some time, we simplified this complexity to a hierarchy of game systems and relationships between them and started creating feature teams which were changing every milestone, simply because we did not have enough resources. Regarding planning the situation is reversed; you must start simple and add complexity to planning only if the previous step worked. So the hierarchical approach is the key. But again, evolution of our project management, like everything else, will never end.

What were the most significant differences between developing Arma 3 and Arma Reforger, besides creating new engine, from your point of view?

Those are totally different stories.

Firstly, Arma 3 release was an evolutionary step from Arma 2 on stable engine on PC only with relatively small but stable team of developers. Brilliant and complex Arma 3 as we know it is a result of several other years of further iterations, additions through all the DLCs, but still on stable engine and one platform.

Arma Reforger is a different challenge. We had almost nothing in the beginning, not even a team. We had Enfusion engine in some state of development, we had some assets from our other games to play with, but nothing really worked yet. So development of Arma Reforger was about building up a team hand in hand with the game itself, staring from implementation of core game features step by step from scratch, and of course, it was about setting up close cooperation with brilliant Enfusion developers.

Regarding the technical aspects of development, everything is different in Arma Reforger than in Arma 3: different engine architecture, authoritative server, Enforce scripting language. It has been built on a completely new technology.

But nothing from this really matters. We have created Arma again, because we are following the legacy, it’s about passion, about love, things shouldn’t just work, it needs to have something deeper in it otherwise it will die. It’s not in the technology; it’s in the people – in all our amazing and passionate developers that love working on this amazing project so much.

What makes Arma “Arma” according to you?

Complexity and authenticity created by people who are totally passionate about it.

Thank you Ján for the interview! I have only one question left, what is your favorite Arma moment? Be that in the game or development.

First was when I’d seen amazing positive feedback on Arma 3 audio upgrade several years ago. Then I fully understood how much passion for Arma is in our beloved community.

Second was when I heard my composition, This Is War (Arma 3 main theme) played live by the orchestra for the first time.

And the third one? Arma Reforger release!

Arma is far from just being a game.